After Celebrating 20 years since their victory in the 1995 24 Hours of Le Mans, McLaren announced that they would resurrect the GTR name by launching a track-only version of the P1, the P1 GTR.

The P1 GTR was made available to the 375 P1 owners only, and the production was limited to 35 units. The concept car made its debut at the 2014 Pebble Beach Concours d’Elegance in August 2014.

The P1 GTR generation model was formally divulged at the 2015 Geneva Motor Show. The GTR variation is valued at GB£1.9 million. This cost incorporates an overall proprietors trackday arrangement; later P1 GTRs were offered for less cash, roughly $1.7 million, for those P1 proprietors who had no enthusiasm for the track arrangement yet at the same time needed to buy the GTR variation.

McLaren states that this will be the most intense McLaren to date, with a planned power yield of 987 bhp (1,000 PS, 735 kW). The car will likewise highlight smooth tires, and have more noteworthy levels of execution, hold, optimal design and downforce in contrast with the street car.

Highlighting another settled ride tallness on race-arranged suspension, a settled back wing equipped for utilizing DRS, and another only planned fumes, McLaren expects to convey a definitive track understanding.

This constrained version will go into generation in 2015, after each of the 375 standard P1’s have been worked, as tribute to its race-winning precursor, the famous F1 GTR, and will be assembled, kept up and keep running by McLaren Special Operations.

The P1 GTR half and half motor goes for creating 1,000 PS (987 bhp); 84 bhp over the present model, in spite of the fact that McLaren did not unveil whether the power increment is from electrical lift or tuning the twin turbo 3.8-liter V8. Execution figures are unverified. P1 GTR weight was decreased by 50 kg and convey energy to-weight proportion of 687 bhp per ton. 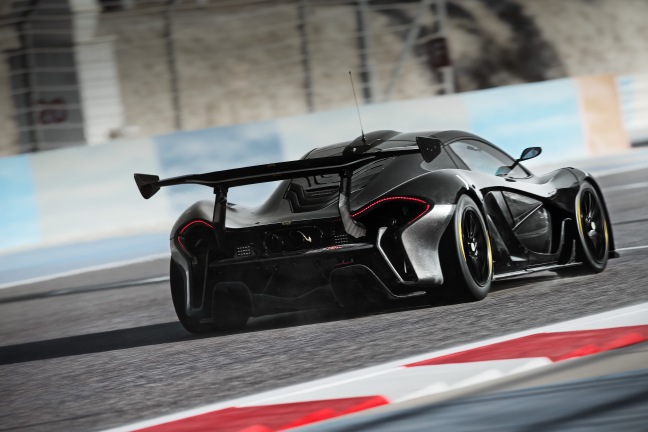 Note: All images belong to their respected owners.